Betty Boop and The Jazz Era

Betty Boop and The Jazz Era 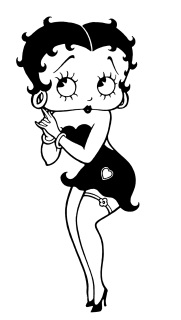 "Betty Boop" is a cartoon of the early 1930s. It was the creation of the Fleischer brothers, Jewish immigrants from Austria.
Short haired, provocatively dressed and independent, Betty is the quintessential "flapper”, the heroine of the Jazz Age. The typical flapper was a young women who was often thought of as a little fast and maybe even a little brazen. The flapper was "modern." Traditionally, women's hair had always been worn long. The flapper wore it short, or bobbed. She used make-up . And the flapper wore baggy dresses which often exposed her arms as well as her legs from the knees down.
Several of the "Betty Boop" cartoons used jazz songs, not simply as background music, but for style of movement. A very interesting example is "Minnie, the Moocher."


The film begins with live action footage of Cab Calloway. Cab sings and dances the title song. When the animation begins, Betty and her father, an austrian Jew, are arguing. He insists that she must follow the family tradition and eat a traditional dish. Betty tearfully refuses. With her boyfriend, the dog Bimbo, she decides to run away. While walking away from home, Betty and Bimbo wind up in a spooky area, and hide in a cave. A ghost walrus appears to them, and begins to sing "Minnie the Moocher," with many fellow ghosts following along.

Folks, now here's the story 'bout Minnie the Moocher,
She was a red-hot hootchie-cootcher,
She was the roughest, toughest frail,
But Minnie had a heart as big as a whale.

Now, she messed around with a bloke named Smoky,
She loved him though he was cokie,
He took her down to Chinatown,
He showed her how to kick the gong around.

Now, she had a dream about the king of Sweden,
He gave her things that she was needin',
He gave her a home built of gold and steel,
A diamond car with a platinum wheel.

Now, he gave her his townhouse and his racing horses,
Each meal she ate was a dozen courses;
She had a million dollars worth of nickels and dimes,
And she sat around and counted them all a billion times.


Betty and Bimbo are terrified, as well they should be, for the Walrus transforms itself into a spectral cat whose kittens suck it dry and into a prison guard who escorts skeletons to the electric chair, among other transmigrations. Finally, Betty and Bimbo run for their lives, pursued by various goblins and skeletons. Bimbo seeks refuge in the dog house. Betty climbs into her own bed. The farewell letter she left for her parents obligingly shreds itself, leaving the message "Home, Sweet, Home."

The Old Man Of the Mountain


In "Old Man of the Mountain" the Fleischers used the storyline of the song for their own plot. In this cartoon there is several jazz songs. First an owl, in Calloway's voice, sings:

With a long, white beard and a crooked stare,
He tramps along with the folks all scared;
With a twinkle in his eye, he passes them by,
The Old Man of the Mountain!

Oh, he wears long hair and his feet are bare,
They say he's mad as a grizzly bear,
His cares are none and he fears no one,
The Old Man of the Mountain!

He talks with the bears when he's lonely,
He sleeps with the sky for a tent,
And he'll eat you up when he's hungry,
And it wouldn't cost him a red cent!

And he'll live as long as an old oak tree,
He'll eat up fools like you and me,
Oh, I often sigh and jump and cry
At the Old Man of the Mountain!


Betty announces her intent to "see this Old Man of the Mountain" and heads up the path. When she gets to the top, she and the Old Man do their duet:


The duet ends abruptly when the Old Man grabs for Betty. She try to escape and at the animals of all sorts come to her rescue.
These cartoons were the first opportunity many viewers had of seeing Louis Armstrong and Cab Calloway perform. For some in the audience it was the first time they heard real jazz rather than the "jazzy" songs of Jolson. The music was as irreverent and as sensual as they had heard. It dealt with sex, drugs, violence. Further, the cartoons themselves were equally transgressive. In Betty's first cartoon appearancee, "Dizzy Dishes," she is a dog or, more precisely, a cross between a woman and a dog. Bimbo, the star of the cartoon, falls for her at once. In "Minnie the Moocher," her seventeenth cartoon appearance, she is the daughter of Jewish immigrant parents. Bimbo is her friend but there is no hint of romance. In "I'll Be Glad When You're Dead," Betty's thirty-second cartoon, she is African. There is, again, no romance.The Fleischer brothers did more than introduce jazz to the movies. They also added a discordant voice to the ongoing discussion in the mass media about race, ethnicity, and nationality. They made cartoons in which nothing was fixed.


The cartoons played equally fast and loose with notions of female virtue. This Talkartoon, published in 1932, is Betty Boop's fifteenth cartoon appearance. This cartoon is billed as a Betty Boop cartoon, with Bimbo and Koko, and starts out with one of the songs written for Betty Boop.

There's a little queen
Of the animated screen;
Wait 'til you, get a view of Sweet Betty!

Made of pen and ink,
She can win you with a wink;
Wait 'til you, get a view of Sweet Betty!

Those eyes, that pretty nose,
Although aside from these,
she's got so much of those!

If you want to see
Just a perfect little she,
Wait 'til you, get a view of Sweet Betty!


The cartoon takes place in a circus tent, where Betty is one of the performers. When Betty comes out to do a tight-rope act, she sings "Do Something":

It's been told and explained,
That nothing tried is nothing gained!
Oh, oh, come on, please, do something!
Boop-oop-a-doop!


During this performance, the ringmaster starts drooling over Betty, and he follows her to her dressing room. He engulfs her with his enormous body, and asks, "Do you like your job?" He paws her leg; she squeals and slaps him, and starts singing:

You can feed me bread and water,
Or a great big bale of hay,
But don't take my boop-oop-a-doop away!

You can say my voice is awful,
Or my songs are too risqué,
Oh, but don't take my boop-oop-a-doop away!


At this point, Koko the clown comes to the rescue. He and the ringmaster fight. Koko wins. He goes over to Betty and whispers something in her ear. "No! He couldn't take my boop-oop-a-doop away!" she replies. Then she and Koko kiss. Betty's "boop-oop-a-doop," her trademark, is not her virginity, what a conventional heroine would seek to preserve. Instead it is her sensuous approach to life. That is perhaps why she and Koko, who usually plays relatively minor roles in Betty's cartoons, when he appears at all, wind up in a romantic clinch at the end.

Unknown. (2003, June 15). Untitled Document. Retrieved May 29, 2009, from Assumption College: A Catholic College founded by the Augustinians of the Assumption:: http://www.assumption.edu/ahc/1920s/BoopAndJazz.html
en 9:15